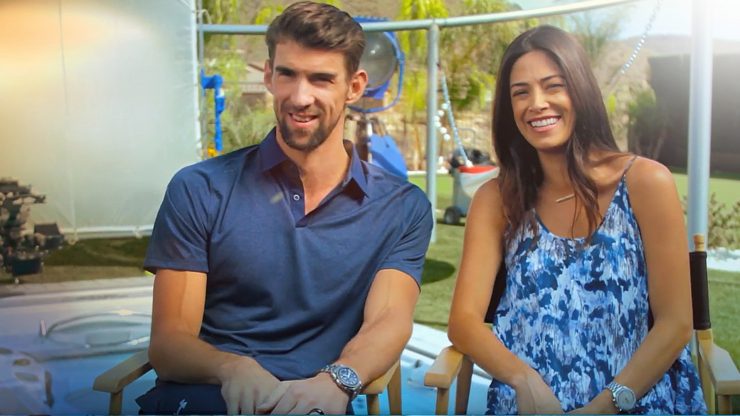 Michael Phelps first partnered with Master Spas in 2010, after he had won his eighth gold medal in Beijing.

The young swimmer was already on his way securing his spot in the record books. With his Master Spas partnership, Phelps and his coach helped develop the industry-first Michael Phelps Signature Swim Spas.

The swimming pool alternative allowed his coach to analyze Phelps’ stroke and offer real-time feedback so that he could refine his technique. The result? “I believe training in the swim spa helped me develop the best freestyle stroke I’ve had in my career,” Phelps says.

But now the 23-time Gold Medalist sees the water — and his signature swim spa line — differently.

“I like getting in the water because it’s peaceful for me to swim,” Phelps says. “I enjoy just being in the water, being by myself.  It gives me time to clear my head.”

Master Spas has debuted a new video starring Phelps, his wife Nicole and their oldest son Boomer. Master Spas takes viewers into a swim spa with Phelps to see how his relationship with water has changed since retiring from competitive swimming.

Showcasing the versatility of Michael Phelps Signature Swim Spas by Master Spas, the video features Michael Phelps spending time with his family, as well as working out, swimming, and relaxing all within the swim spa.

In the new video, Phelps shares that a swim spa is for more than just swimming — even for someone like him.

The model featured in the video is an MP Momentum Deep, which has an adjoining hot tub. The dual temperature swim spa allows you to have the best of both worlds: a hot tub with a swim spa.

“It’s always nice to be able to take a deep breath and just relax,” Phelps says.

The swim spa has comfortable seating with massage jets and other hot tub features that can help you relax and reconnect after a busy day.

“Nearly all the Michael Phelps Signature Swim Spas feature a therapeutic seat with out-of-water neck and shoulder jets that give you a great, stress-relief massage,” Michael Phelps says. “The swim spas also have an Xtreme Therapy Cove, which provides massage coverage for your lower back, hips, thighs and calves.”

Family Time in a Swim Spa

For families, a swim spa can be used as a pool alternative. Children can splash around, play games, and float on a raft.

But more than that it can be an ideal place for children to learn how to swim.

“A large pool can be intimidating to children — and parents — when little ones are learning to swim. The swim spa offers a perfect environment for children, or anyone, to learn how to swim,” Phelps says.

The smaller swim area is reassuring and full of fun. Children love the water features, and parents can enjoy the intimate setting where you can focus on water safety.

The partnership between Phelps and Master Spas began in 2010, with the launch of the industry-leading Michael Phelps Signature Swim Spas line. Master Spas has continued its reputation for leadership with the addition of innovative, industry-first features such as the Swim Number App (SNAPP) and Wave Propulsion System. Today, Phelps’ relationship with Master Spas also includes the Michael Phelps Legend Series, an ultra-premium line of hot tubs.