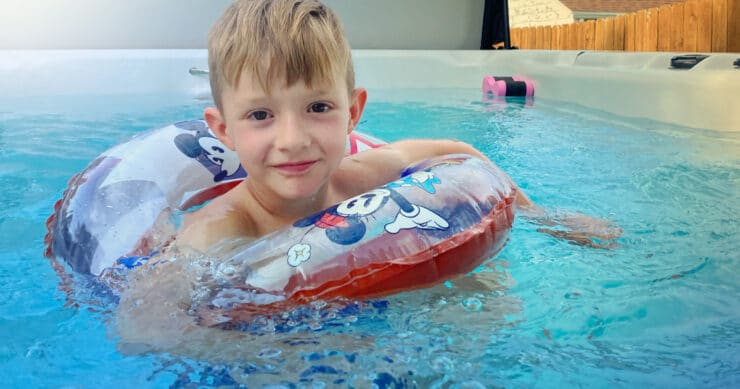 It was unseasonably warm that Memorial Day, and we had decided to head to the state park. The boys were excited to cool off on the beach, build a sand castle, and end the day with ice cream. At 2 and 6, it was hard to contain the excitement. I barely got a life jacket on the youngest and a puddle jumper on the oldest before they ran ahead. I trailed behind, lugging a tote of beach toys.

It happened in the blink of an eye. One moment my sons were playing on the beach, splashing in the water. The next, my youngest son was face first in the lake. I sprinted to him, pulled him out, and held him close to me.

My son spent the rest of the day on the beach, tossing sand and cuddling up when the lake lapped toward his toes. He was in the water no more than 15 seconds but the damage was done. He was scared of the “deep.”

A fear of water is common in children. It can be an incident, like my son’s, or the constant refrain of “no” when a toddler approaches the water. It is equal parts heart-wrenching and frustrating.

I spent swim lesson after swim lesson trying to coax my son to let go of the side. I walked around the pool with his little hands clutching the back of my neck. I heard him scream as we tried to walk with him toward open water.

But those shrieks have been replaced with squeals of delight.

What changed? The arrival of a Master Spas swim spa.

Do you want to know a way guaranteed not to help your child overcome his fear of water? Forcing them into a pool, lake, or other body of water. When you push too hard, you end up intensifying his fear. And, potentially, risking his trust in you.

It’s important to take small steps to get your child used to the water. It can be letting them walk to the water’s edge or splashing their hands in the water. Each step has to be on his terms so that he feels like he is in control and safe.

After our swim spa arrived (and the water wasn’t 55 degrees, like it was on fill day), my son was interested in the water. He wanted to hop in and splash. However, he had no interest in moving around the spa. He sat in the hot tub seats and that was it.

We tried to encourage him to go in the swim area while we held him. He refused. And that was OK.

But as the family splashed and played, our son became more interested in the fun that could be had. With his arms wrapped tightly around my neck, I walked around the edge of the spa. We started with one lap and then two. Two became three. He knew that at any time, he could touch the edge and hold on.

A swim spa is a great place to help your child overcome a fear of water. It’s a contained space where you can always see the bottom. If they want to push off from the wall, the other side does not seem that far.

And because it’s just a few steps away from our back door, he was able to go in for just a few minutes each day. As the days progressed, his dips in the swim spa became longer and longer.

The more time my son spent in the swim spa, the more I wanted him to learn how to swim. However, I knew it was not going to be as simple as enrolling him in classes at the local high school.

Private swim lessons in the swim spa would be a way to teach him the fundamentals of swimming, as well as stress water safety skills.

It’s important to teach water safety to your kids. Whether they are going to the lake or just hanging out by the pool, they should know that the best way to have fun is to be safe. Water safety is even more important when you have a backyard swim spa or pool.

It also helps when your child is able to learn and interact with someone outside the family. One of the unexpected benefits of private swim lessons was how much our son was willing to do for the instructor.

Example: If we were in the swim spa with my son, he did not want to lower himself into the water. However, with our instructor, he began to blow bubbles.

After several weeks, my son was excited to practice his freestyle in the current (floaties on) and kick while holding the grab bar.

“The swim spa is fun because I get to play in the jets and stuff.”

After swimming and playing in the swim spa for four months, my son now associates the water with fun — not fear.

The minutes and lessons in the spa added up to the change. However, there were some things that we did to make the water fun for him.