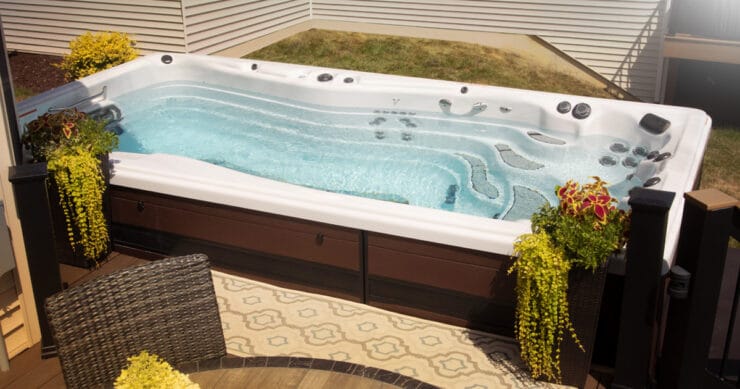 Family life had changed for the Terrells amid the global pandemic. Swim practices were canceled, gyms were closed, and screen time was increasing. But it was important to the family of four that they had a place where they could stay active and connect.

That place? A swim spa by Master Spas — specifically an H2X Trainer 15D.

The obstacle-free swim area offered a place to splash, and the endless current could be adjusted so they could keep swimming. Lisa could focus on aquatic therapy after back surgery. And, at the end of the day, everyone could get in to play games without the distraction of screens.

Go behind the scenes of the Terrell’s installation and see how the homeowner built a deck for the swim spa.

About the H2X Trainer 15D

The best-selling swim spa by Master Spas, the H2X Trainer 15D has a spacious area for swimming and fitness; a jetted current ideal for recreational swimming and aquatic fitness; and therapy seating for relaxation.

The unique design of the VIP system draws and drafts water from multiple points in the swim spa. The endless swim current is smoother and less turbulent than other jetted swim spas.

Tips for Installing a Swim Spa on Deck

In their suburban neighborhood in Indiana, the obvious location for the family’s swim spa was in the backyard on an existing concrete patio.

But the family wanted convenient access to the swim spa. Everyone would be more likely to use the swimming pool alternative if it was just steps out the patio door. And by installing the swim spa on a reinforced deck, the swim spa became part of the family’s entertaining space.

The swim spa was positioned next to an existing deck so that the top is about two feet above the deck. This height makes it easier and safer to get in and out of the spa. But the partially recessed look of the swim spa also offers additional seating if needed.

To build the deck for the swim spa, the owner had to dig six holes for the footers. Living in northeast Indiana, he needed to dig below the frost line — 36 inches. But his advice for homeowners who are considering putting a spa on a deck is to have the soil tested. Indiana soil contains a lot of clay, and the footers settled a bit after installation.

Master Spas recommends that there is three feet of space allowed around the swim spa so that a service technician can access the equipment. The homeowner made use of the space by adding a deck box, where he keeps swim spa chemicals, water toys, and the H2Xercise equipment.

A cover lifter can make it easier to get in and out of the swim spa. However, the device will add to the overall dimensions of the swim spa installation. If the swim spa will have a “snug” fit on the deck, be sure to account for the added clearance when building.

Choose materials that will be easy to match or buy a bit extra than the project requires. Weather-resistant decking like Trex does not typically fade so you can add space seamlessly.

The swim spa owners are happy with their home. But they did want to plan for a possible move in the future. The swim spa was installed so that it could be moved with them to a new home. As for the potential future residents, they would have increased deck space ideal for entertaining. The only thing they would need to do is add a railing.