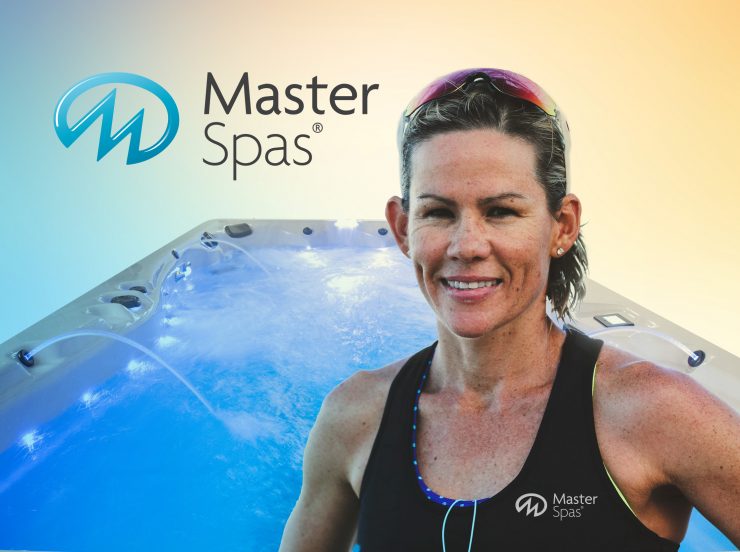 Coming off an exciting win at IRONMAN 70.3 Victoria, Mirinda Carfrae has her sights set on the big Kahuna. Or, should we say Big Kona.

The Australian native who lives and trains in Boulder, Colorado, has earned her spot for the IRONMAN World Championships on October 12 in Kailua-Kona, Hawaii.

And when she steps on the beach, she’ll have a new sponsor on her kit — Master Spas. Carfrae is the newest brand ambassador for Master Spas, the largest swim spa manufacturer in the world.

Carfrae, an accomplished triathlete with three IRONMAN World Championship wins on her resume, will begin training in the latest innovation from Master Spas — an H2X Fitness Swim Spas Challenger model.

“I’m really excited to be partnering with Master Spas,” Carfrae says. “IRONMAN training takes up a lot of my day and having a swim spa at home will not only save time but also allow me more time with our baby daughter Isabelle.  She loves the water, too, so there’s a high probability play time with her in the swim spa by Master Spas will surpass swim training time.”

The Challenger series from Master Spas bridges the gap between traditional jetted swim spas and propulsion systems. The unique airless jet system creates a water current that is more efficient, powerful, and smoother than the competition. With the ability to control the resistance and temperature, novice swimmers to competitive triathletes can enjoy a continuous swimming experience that mimics open water.

Carfrae, who is known as Rinny, began racing triathlons at the age of 19. In 2001, she made the 2001 Australian Junior Elite Team and hasn’t looked back since. She’s taken the win three times at the IRONMAN World Championships in Kona, as well as won more than 20 IRONMAN 70.3 events.

She trains in Boulder, Colorado, where she lives with husband Tim O’Donnell and daughter Isabelle.

“We are thrilled to welcome Rinny into the Master Spas Family,” says Kevin Richards, vice president of sales and marketing. “Rinny is a fierce competitor who wants to be at her best, all the while taking care of daughter Isabelle. Like so many people, she has to balance her training with being a mom, wife, and business woman. Swim spas from Master Spas can help people of all levels train better and recover smarter while keeping family first.”

The family of three shares their training and life journeys on their YouTube channel, Tim & Rinny. From recovering from tonsillitis to breaking the tape at Victoria and even opening an Easter basket with Isabelle, viewers get to see the Rinny’s highs and lows and everything in between.

A swim spa offers everyone from first-time triathletes to world-class athletes like Carfrae the chance to progress to a higher-level training without additional stress. It’s all thanks to the natural buoyancy and resistance of water.

Professional triathletes can spend up to 45 hours a week swimming, biking, and running. However, Carfrae takes a targeted approach — cutting extraneous workouts and focusing on quality efforts. What does that mean? Her hard workouts are hard.

A swim spa is a place where Carfrae will be able to unwind from those tough training sessions. The adjustable temperature and thoughtful jet place deliver relief from aches, improves circulation, and brings nutrients and oxygen to the muscles.

One thought on “Introducing our newest Challenger: Mirinda Carfrae”