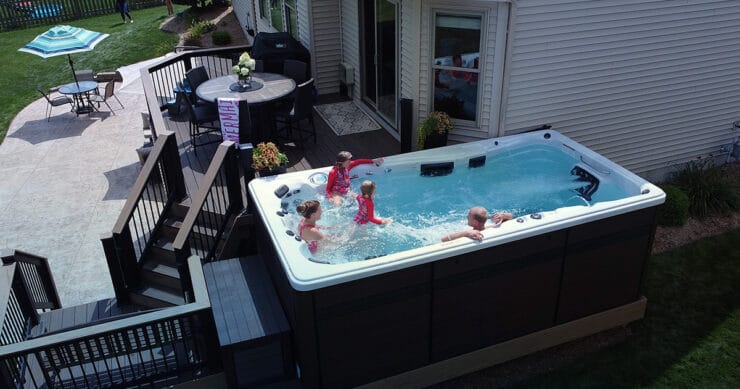 The answer was no. Nick T. did not want a swim spa. The northeast Indiana homeowner had concerns about installing an alternative to an in-ground pool — water care, cost to operate, and where it would go.

But every time he said “no,” his wife was able to answer his question and help him overcome the objection.

Water care would, more than likely, take just a few minutes each day. The cost to operate a swim spa is less than $2 a day, and their homeowner’s insurance would not increase. As for where to install the swim spa, the couple had options. The spa could be placed on an existing patio, or a deck addition would make it more convenient to swim and relax.

A green light, though, did not mean the planning went from zero to installed in less than 60 seconds.

The family ordered the swim spa — an H2X Trainer 15D by Master Spas — in early 2020. And while they did beat the increased demand during the pandemic, the family did have to wait for the spa to be manufactured.

Not that Nick minded. The time allowed him to prepare the site for installation.

“Things do take time. I felt like I wasn’t rushed,” Nick says. “It was well worth the wait.”

While the Trainer 15D could be installed on a ground-level patio, the family wanted better access to the swim spa. The ideal spot would be just a short walk from their patio doors and near the family’s outdoor entertaining space.

It might mean a bit more work but an addition to an existing deck would help the family get the most out of the swim spa — and their investment.

Referencing the Backyard Planning Guide and advice shared during Master Spas Facebook live events, Nick built a reinforced deck that would help the swim spa become part of the space.

Related post: Tips for building a deck for a swim spa

Aquatic Therapy for Back Surgery

An active mom of two, Lisa was on vacation when she had to undergo emergency back surgery. The surgery was unexpected and was “a page-turner” for their family.

The road to recovery was marked with physical therapy and chiropractor appointments. Challenges and successes. But Lisa wanted something she could do at home, something that would help her return to the life she was used to.

And she saw the swim spa as a way to do that. Swimming and exercising in the Trainer 15D by Master Spas has increased her mobility, while the therapy jets have eased aches and pains. Her discomfort improved and she found herself skipping the occasional chiropractor appointment.

Family Time in a Swim Spa

Five years can feel like a lifetime when you are in elementary school. For the daughters of Nick and Lisa, they are at different stages in their lives. The 10-year-old can go for long bike rides and participate on the dive team. The 5-year-old sister, though, often rides in a trailer for the family rides and likes to splash more than swim.

“We have a 5-year-old and a 10-year-old and getting them to do something together is very hard,” Lisa says. “We found that with the swim spa the 5-year-old can enjoy it just as much as everyone else can.”

The H2X Trainer 15D swim spa bridges the age gap, offering a safe space where the entire family can play together. The girls can swim and splash, dance and sing. They can play games, dive for toys, and use the H2Xercise equipment — year-round.

“Now we shut the TV off, and we all go out into the swim spa,” Nick says. “We spend a lot more family time together.”

“We enjoy it like a pool without all the extra work of a pool,” Lisa adds.

One of the surprises of owning the swim spa has been how much the entire family likes to get in. Grandparents come to visit with suits in hand, happy to hop in with the kids. Younger cousins love to play in the water. Everyone can be active together rather than someone being left on the sidelines.

“The whole family enjoyment of it and the four of us being in there together — that is probably our favorite memory.”