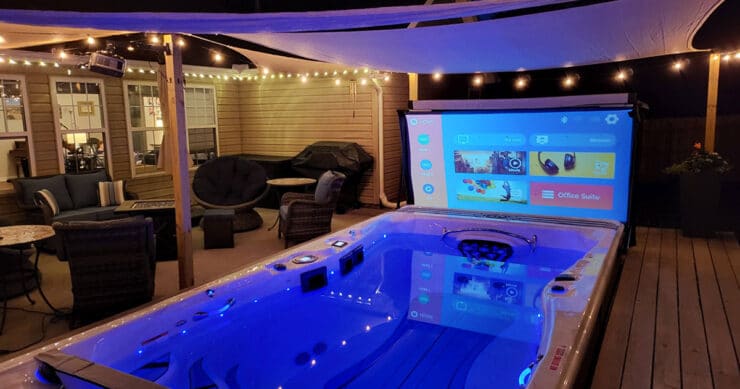 Tennessee homeowner Chris grew up swimming and loved to get in the water. But when it came time to add a swimming pool to his backyard, the space was not ideal. The yard was small and sloped, and there was a road nearby.

But even without an in-ground swimming pool, Chris and wife Leigh have created a backyard oasis that is just as much about spending time together as it is about fitness.

“We were looking for something that would give us the ability to swim, relax, have a good time, and the swim spa is the perfect solution to that,” Chris says.

After spending more than a year researching eight different brands, the couple chose an H2X Challenger 19D. The dual-zone swim spa by Master Spas has a swim area and separate hot tub. The swim area can be kept at a “pool” temperature, while the hot tub side is set to a soothing 102 degrees.

As part of Master Spas’ Summer Backyard tours, Ben and Mari take a tour of the space to see what makes it so special.

Recessed swim spa: Behind the build

It wasn’t the kitchen or the size of the master bedroom that sold Chris and Leigh on their house.  It was the backyard and the patio.

While they live in a tightly knit community, the concrete patio had a sense of privacy and plenty of room for entertaining. It stretched along the entirety of the home, and it was easy to access from the patio door.

Still, it wasn’t their dream backyard — a place to swim, hang out, and relax. They needed the swim spa.

Before it was craned in, though, Chris and Leigh did a lot of planning. First, they had to work with the HOA and have the pool-spa approved. The community limited the surface area of the water and how far above ground the spa could be. The limit was 25 inches above the deck, and H2X Challenger series spas are 60 inches tall.

The solution: A partially-recessed swim spa.

Working with a landscaper, they created a custom swim spa installation complete with vault, trap door, and advanced drainage system.

“A big concern for him and us was drainage,” Chris says.

Swim spas are self-contained but heavy rains and flash flooding can back up into the vault. The homeowners chose to install a French drain system, which goes all around the swim spa. There’s a sump pump, too.

But the remarkable part about the recessed spa design is the attention to detail. The spa was installed at a height so that the top step is even with the deck, making it easy to get in and out. The vault beams are installed so that cabinet panels can be easily removed if they ever needed to service the spa. A hinged trap door makes access convenient, and there is ample room to move around the vault.

Leigh works in the medical field, and her job is not only stressful but physical. For her owning a swim spa is just as much about recovery as it is fitness.

“The Xtreme Therapy Cove is fantastic,” she says. “When I come home in the afternoon, this is perfect. I get in there, enjoy the massage of the therapy cove, and get in the hot tub with the Master Blaster foot jets.

Chris appreciates the recovery and relaxation features of the spa but he does a lot of swimming.

“I love the current on the Challenger,” he says, adding that he swims at least three times a week.

H2X Challenger series swim spas have a variable speed current, which allows Chris and other swimmers to set the pace of the workout. The system can be set between zero and 25, and it has a top speed of about 1:20 per 100-meter pace. Six airless jets produce the current of water, which provides a smoother swim experience compared to other brands.

The spa is just about 10 steps away from the patio, allowing to swim when it’s most convenient for his schedule.

And when he’s done? He’s making full use of the Xtreme Therapy cove and even using the swim jets to relieve discomfort in his shoulder.

The recessed swim spa is the focal point of the homeowners’ backyard. However, it is the patio design and other features that make it a true backyard oasis.

Papasan chairs that swivel and rock are made for cozying up with a book, while a wicker-style set offers additional seating. Colorful outdoor cushions brighten up the space and complement an outdoor rug, which softens up the space.

Strategically placed shade sails help maintain an even water temperature and prevent pine needles and other elements from falling into the spa. Chris and Leigh mixed shapes and sizes so that they had coverage where they wanted it most. A patio umbrella provides additional coverage over the seating area.

They were intentional to make sure that the hot tub side was not covered. “Shade during the day,” Chris says, “and stars at night.”

One of the newest additions to the space is an outdoor projector that allows the couple to watch movies, using the swim spa cover as a screen.

“We used to have a projection system and wanted to do movies for the longest time,” Chris says.

The projector has a four-way keystone, which allows you to almost draw the shape of the screen so that it fits the spa cover. A streaming stick is hooked up to the projector, allowing Chris and Leigh to watch their favorite shows while soaking in the hot tub side of the dual-zone swim spa.

The couple also has plans to install an outdoor shower.

How to buy a swim spa

Do you want to be able swim, exercise, and relax at home? Having a Master Spas swim spa allows you to swim on your schedule while adding a fun factor to your backyard. You can click here to find out more about the benefits of hydrotherapy and relaxing in a hot tub. Or, contact your local Master Spas retailer to learn more about swim spa ownership. Wondering how much a swim spa costs? You can request a quote here.