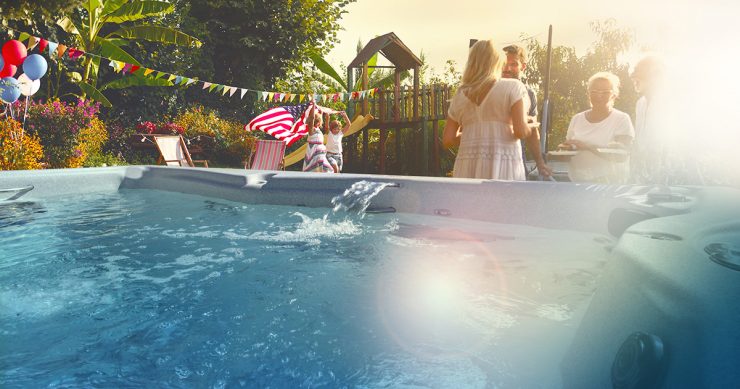 July 4, 1776, is considered by many as the day that the United States of America was born. By the forefathers signing the constitution, a new country was created — a country that values life, liberty, and the pursuit of happiness.

And so it is on this day, we celebrate.

But showing pride in our country isn’t just about a day of fireworks and barbecues. For Master Spas, celebrating the USA means investing in this country.

Master Spas is the largest hot tub manufacturer to have 100 percent of its production in the U.S. On our state-of-the-art 32-acre campus in Fort Wayne, Indiana, we manufacture five brands of hot tubs and two brands of swim spas. Not only that, all of the spa covers are sewn on site.

According to Consumer Reports, “almost 8 in 10 American consumers say they would rather buy an American-made product than an imported one.” A survey showed that more than 60 percent of people polled said they would pay 10 percent more for a product made in the U.S.

Some consumers value the quality of American-made products. Still, more want to support the American economy and workers.

Each year, Master Spas directly contributes more than $100 million into the U.S. economy through wages, purchases, and taxes. And, indirectly through our suppliers and dealers, we contribute hundreds of millions more through wages, advertising, and purchases including trucks and other vehicles.

And while some companies are now moving operations back to the United States (known in the industry as “reshoring”), Master Spas production has always kept its production here.

Master Spas is proud to manufacture all of its products in the United States. But why is it valuable for customers?

Here are five reasons you should buy an American hot tub or swim spa:

Master Spas employs more than 600 people at its Fort Wayne headquarters, with many of those positions in production. According to MadeintheUSA.com, each manufacturing job creates an additional five to eight jobs.

When companies keep jobs on U.S. soil, not only are they pouring money into the economy — but investing in the country. Manufacturing in the U.S. helps to encourage job growth, supporting job growth across all industries. Having more jobs here means that future generations will be able to find meaningful work. And the taxes that companies pay can be used by the government to improve infrastructure, create programs, and more — which are things that benefit all Americans.

According to the Consumers Reports survey, 90 percent of people said how well workers are treated was important. Buying from an American company means that you can feel confident that the employees are paid a living wage and work in a safe environment. Plus, Master Spas puts its employees first with holiday parties, summer picnics, and more — all so they feel appreciated.

For consumers who value buying products made in America, it’s not just about the workforce. They also place importance in being charitable. The Consumer Reports survey showed 92% of respondents said they would more likely buy from a company that supports the local community.

At Master Spas, helping others is one of our core values. We support the Vera Bradley Foundation for Breast Cancer, Lupus Foundation of America, the Crossing alternative school, NAZ Children’s Centre, and many more local organizations..

Master Spas hot tubs and swim spas builds its products to meet the most stringent safety and energy standards. And that — the quality of the product — is important to shoppers. The Consumer Reports survey showed that many believe American-made products are often better quality than foreign-made.

From everyone at Master Spas, have a safe and happy Fourth of July!