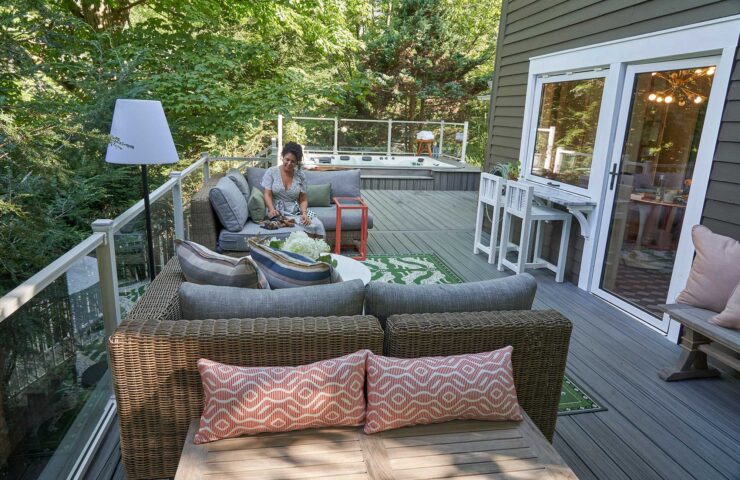 A three-acre property in the Pocono Mountains, the #1796 house was an opportunity for Evette Rios and her family to leave the bustle of New York City for the quiet of rural Pennsylvania.

The lifestyle expert and designer, who is a frequent guest on shows like “The Rachael Ray Show,” wanted to restore the two-story log hewn home while maintaining its charm. But there would be some challenges adapting the home and property to the lifestyle of a busy, modern family.

A thoughtfully designed space would allow Rios to enjoy the mountain views while providing for her family. The #nicebigdeck project transformed the outdoor space, making it just as functional as it is fun.

There’s composite decking by Trex and an outdoor kitchen complete with pizza oven. A large window swings open to blur the line between the outdoors and in. Bringing the space together is a swim spa by Master Spas. An alternative to a plunge pool, the swim spa offers Rios’ family space to swim and splash.

And, if she’s lucky, a chance to relax … it is Master Spas, after all.

Evette Rios’ deck project took place in stages — from the initial structure to functional aspects like stairs, lighting, and railings.

One of the final pieces of her project was the swim spa by Master Spas. Rios had always wanted a pool but living in the mountains of Pennsylvania, a pool was not a practical option. A swim spa affords her family the opportunity to swim and play year-round. And with the design of the deck, Rios can watch her children and husband in the spa while she prepares dinner (if need be).

Rios chose to have the swim spa installed in the Trex decking, mimicking the look of an in-ground pool. The design required additional structure underneath to support the weight of the spa when filled with water.

“When it was brought in, I wanted to keep a lot of the trees and branches and all the bushes around it so it felt like you were swimming in a treehouse,” Rios says.

Because of the sloped landscape of the backyard and second-floor deck the swim spa was brought in by a crane. The tree branches and surrounding bushes were dusted with snow and the temperatures were chilly.

Just a few days later, with the water at a comfortable temperature in the 90s, Rios and her family were able to go swimming with the canopy of trees above. Rios has two young sons, and her parents also visit regularly.

“We all LOVE spending our summers together and, whenever we can, we are in the water,” Rios says.

The swim spa gives her family a place to hang out but, as a mom, the swim spa “gives her permission” to relax. Swim spas by Master Spas have a water current for exercising and therapy jets for relaxation. There are 16 models so that people can find the best swim spa for their space and lifestyle.