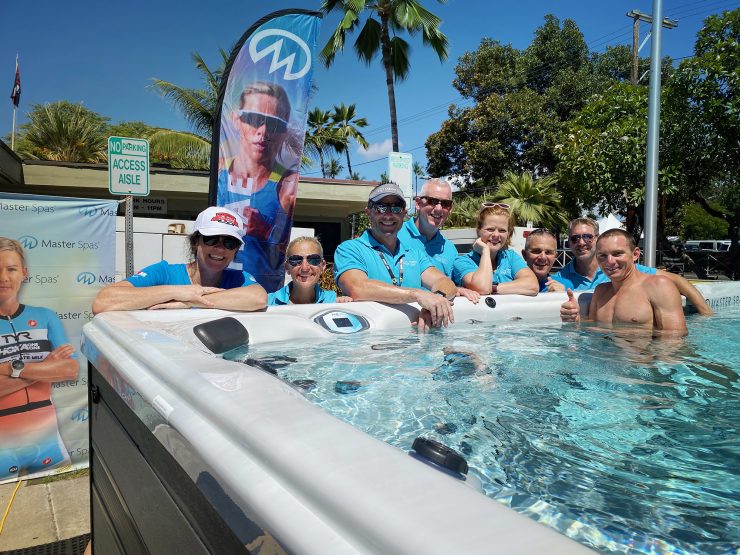 Considered the “Super Bowl” of the sport, the IRONMAN World Championship is the most iconic race in the world of triathlon. The race spans 140.6 miles across the Big Island of Hawaii, with a 2.4-mile swim in Kailua Bay; a 112-mile bike up to Hawi, where the winds are considered epic; and a 26.2-mile run that goes through the infamous “energy lab.”

The race takes place during the second week of October, and Master Spas was there to witness the excitement, preparation, and determination.

Not only that, we were there to cheer on brand ambassadors and professional triathletes Ben Hoffman and Mirinda Carfrae.

Here are our favorite moments from the IRONMAN World Championships in Kaiulua-Kona.

While all eyes might be on the professionals, the field of 2,500 athletes prove true the IRONMAN mantra, “Anything is Possible.” There are athletes who qualified for Kona by placing in their age group at another full-distance IRONMAN race and there are those who became eligible through the IRONMAN Legacy Program. Still others won the “40 Years of Dreams” contest and others entered through IRONMAN Foundation.

The resulting field showcased that people of all abilities could line up on the beach with the same goal — to have their best race on Oct. 12, 2019.

Master Spas was fortunate enough to meet many athletes as they stopped by our booth in IRONMAN Village and even took a dip in the H2X Challenger 15D swim spa.

Athletes from around the world — from France to Finland, Connecticut to Washington state, Germany to China — saw the difference of the H2X Challenger and how it could benefit their training for an event like a full-distance IRONMAN.

But it wasn’t just the race-focused athletes testing their freestyle skills against the current of water. Children who climbed in the water proved that a swim spa by Master Spas is not just for training.

While some of the youth enjoyed splashing around, others who tested the swim spa were competitive swimmers or aspiring triathletes. Standing nearby, Mom and Dad could see the time-saving convenience of a swim spa by Master Spas.

Catching Up with Ben Hoffman

“Turn the jets on and relax,” joked Ben Hoffman as he sat in the Master Spas booth in IRONMAN Village.

The professional triathlete stopped by to film a segment for IRONMAN’s morning show, the Ohana Hour; go for a swim; and chat with the team about how he is incorporating a swim spa by Master Spas into his training.

The Tucson, Arizona resident has been swimming in an H2X Challenger since spring, and it’s one of his favorite training tools. Hoffman enjoys using it for recovery swims after long efforts on the bike or hard runs. In addition, it’s a great way for him to enjoy time with his wife, Kelsey, at the end of the day.

The couple recently became parents, welcoming baby Josie into the family. And the two already have plans to teach her to swim in the Challenger!

Professional triathlete Mirinda Carfrae is no stranger to the grueling IRONMAN World Championship course in Kona. She made her debut at the event in 2009 with a second place finish, and she has competed multiple times in the past 10 years. Three times, she took the overall crown.

Rinny, as she is known, took time to share about her partnership with Master Spas on the main stage at IRONMAN Village. Following the interview, she made her way to the booth to offer swim tips for athletes — whether they were competing in Kona or hoped to one day.

And while everyone was listening closely, it was hard not to get distracted. Two-year-old Izzy, whom fans have come to know on the Tim & Rinny Show, was enjoying her time in the swim spa.

The Master Spas team might have wrapped up work at the booth Friday afternoon but athletes were gearing up for the big day.

The pro men began the swim at 6:35 a.m. October 12, starting off the race for the 2,500 athletes. And while they were making their way across the bay, the Master Spas team was on its way to the Queen K to spot brand ambassadors Ben Hoffman and Mirinda Carfrae in the early miles of the bike course.

Hoffman, along with podium finishers Frodeno, Tim O’Donnell and Sebastian Kienle, whizzed by toward Hawi while we headed down to the run course.

Hoffman, who was patient through the bike and run, hammered it in the run. He logged a blazing 2:43:08 marathon and finished fourth overall.

Brand ambassador Mirinda Carfrae didn’t have her best day, as she experienced problems on the bike. Despite her disappointment she was very excited to cheer on her husband, Tim O’Donnell, and embrace him as he crossed the finish as second overall and top American.

But both Hoffman and Carfrae put it all out on the course, and Master Spas couldn’t be more excited for them.

One thought on “Highlights from the 2019 IRONMAN World Championship”