Local manufacturer Master Spas plans to hire an additional 200 team members for various positions in the next two months in an effort to keep up with customer demand and industry growth. 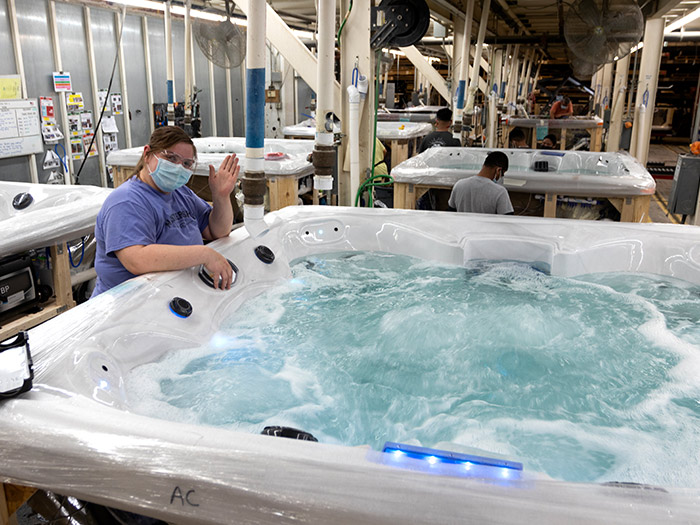 Master Spas currently employs over 1,000 people, having added 400 jobs and a second shift since March 2020. The new jobs Master Spas hopes to fill include positions in production, warehouse, industrial maintenance and production management. There are also openings for additional Manufacturing Engineers and Software Developers.

As Master Spas looks to attract new candidates, they are offering competitive new hire package that including:

"There are so many jobs available right now. Great companies all over the area are looking to grow their staff. We know that to attract and keep the type of quality team members we are looking for we need to be unique. I think what makes us unique is the culture that we have – a culture that is shared by every team member. It starts with a mission to create hot tubs and swim spas for the world to live life better and continues through to one of our core values to have fun! No one really loves to work – but this is the closest that I have ever seen to exactly that!" Hess added.

In order to be able to expand their workforce in production and warehouse positions for both first and second shift, it is offering two to three group interviews per week.

To view complete job descriptions for all open positions and to apply to join the team, interested candidates should visit www.MasterSpasJobs.com.

The facility occupies 36 acres, and there's 530,000-square-feet of production, warehousing, and office space. Tens of thousands of hot tubs and swim spas are built annually and shipped to dealers around the world.

Major capital investments have helped Master Spas to continue its growth and meet the demands of the market. Master Spas invested $15.3 million in 2019, building a new 166,000-square-foot swim spa factory and expanding the acrylic spa factory.

Master Spas is based in Fort Wayne, Indiana, 90 miles northeast of Indianapolis. Operating out of a state-of-the-art, 583,000-square-foot manufacturing facility on a 45-acre manufacturing campus, Master Spas is the largest portable spa, hot tub and swim spa manufacturer in the world with all products built in the U.S.A. The company's executive team boasts more than 150 years of spa manufacturing success and one of the strongest track records in the industry. For more information, please visit: www.MasterSpas.com