Wheelchair to cane: How a swim spa helped after stroke - Master Spas Blog 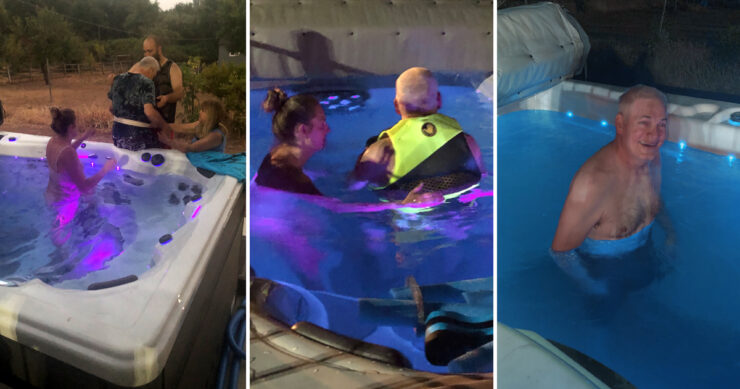 As a territory representative for Master Spas, John M. was leading a busy life. Fridays through Monday were often spent traveling, helping retailers in the showroom or supporting staff at large events.

In the beginning of 2020, John suffered a massive stroke. He spent three months in the ICU and left the hospital in a wheelchair.

His once packed schedule now had one priority: recovering from his stroke and improving his mobility.

John had sold countless spas during his 40 years in the industry but before his stroke, he had never used a swim spa for aquatic therapy.

“When I told people I sold swim spas, they said I needed to use one,” John says.

And thanks to his Master Spas family, which rallied around him, he was able to have one installed at his home.

First, he would have to have the site prepared and a concrete pad poured. However, contractors were in high demand in 2020 and many had full books. But a local company knew how important it was for John to get the swim spa, and they agreed to fit him in. At 4 o’clock in the morning.

In the wee morning hours, before the sun had come up, a concrete pad was poured. Soon, the H2X Challenger 15D would arrive.

The H2X Challenger 15D is a swim spa that has an airless jet system to create a smooth current of water.

At first, friends and family would help John get in the swim spa and he would just walk in the water with the current off for about 15 minutes. The SoftTread allowed him to get a “good grip” as he moved in the water. He had to work on his balance, and he says his “equilibrium is off a little bit.”

“In the very beginning, there was a lot of fear on my part. Once I realized how wonderful it was, I didn’t need much help,” he says.

John tries to use the swim spa three times a week, in the mornings if he can. As he got in more sessions, exercise began to get easier.

“I graduated to walking in the current,” he says. “With the current on, balance was more of a chore.”

The swim spa has been a dream, John says, adding that the buoyancy has helped him make improvements.

John says that within 30 days of receiving his swim spa, he was able to go from using a wheelchair to a walker. His next goal is to graduate from the walker to using a cane — in time to walk his daughter down the aisle at her wedding.

“I use the swim spa primarily for exercise,” he says. “It’s really purpose driven.”

While his focus is on regaining his mobility, using the swim spa for aquatic therapy has offered him a new sales perspective.

When he meets people on the sales floor, he now shares his story — his stroke, recovery, and how a swim spa helped him come back.

“People listen. It’s real world experience,” he says, adding that his passion for selling spas has increased since his stroke.

Taking advantage of water’s natural buoyancy and resistance, aquatic therapy takes place in a warm body of water, like a swim spa or a pool. Aquatic therapy can help a person improve mobility, strength, and balance. Research also shows that it can reduce chronic pain.

Why is aquatic therapy effective, especially for stroke patients? Water’s buoyancy reduces the effects of gravity, lessening the stress on joints by up to 90 percent. Many people find they can move more and with less pain when exercising in water. In addition, water has 600 to 700 times resistance than air. Simply exercising in the water can improve strength.

A swim spa by Master Spas offers a safe space to exercise, especially for those who are recovering from a stroke. The SoftTread Non-Slip Flooring System, an optional feature, makes it easier and safer to get in and out of the spa. Plus, it offers grip and comfort when walking or jogging in the water.

Some stroke survivors, who cannot walk on land, are able to stand up and walk in the water. In a swim spa, they can hold onto the side to steady themselves (if needed) and move their legs.

Exercise is important for patients after a stroke because it can help re-train the brain and improve movement patterns. Research shows that it is an effective therapy, especially when combined with traditional physical and occupational therapies.

Before starting any exercise program, a stroke patient should talk to their doctor.

How to buy a home aquatic therapy pool