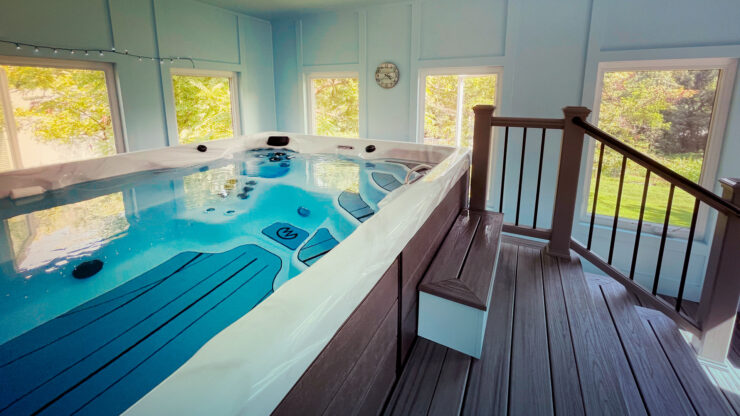 Water exercise had become a part of Susan’s weekly routine. Taking classes at the gym, she focused on exercises that helped improve her core strength and balance.

But these classes weren’t convenient. The gym was a half-hour drive each way, and Susan had to include extra time for navigating the locker room and getting her equipment. An hour workout would easily take up two and a half hours for the day.

Susan wanted a place where she could do all of the workouts she was doing at the gym. A home therapy pool would make exercise convenient and easy.

After exploring her options and consulting with a contractor, Susan chose an H2X Therapool SE by Master Spas and built an all-season room around it. The result? An indoor residential therapy pool that she can use year-round, regardless of the weather. The long drives to the pool, sometimes in the snow, are now a thing of the past.

After several hip surgeries, doctors had told Susan that she would have to focus on core strength and balance for the rest of her life.

And with other health issues, water-based exercise provided the most benefit to Susan. Water therapy can help people build strength and maintain muscle mass with less stress on the joints. The buoyancy of the water helps support a person’s weight, and you can often move through a greater range of motion. In addition, there are many other benefits to aquatic therapy including improved circulation and self confidence.

Susan had wanted to get a swim spa for years but wanted something that would meet her family’s needs. Not only does she use it but so do other family members, including her father.

The 84-year-old exercises in the H2X Therapool SE about three times a week. These sessions have helped him stay active as he ages.

The Therapool SE has 21 stainless-steel jets, including three flow stream swim jets. You can use the jets for gentle swimming, water walking, and other aquatic therapy exercises.

“I can actually swim in there,” Susan said in a Facebook Live video with Master Spas. “Plus, I can do all the water workouts that we were doing in the gym.”

There is also  bench seating on the side, which can be used for seated exercises or relaxation.

“It met everybody’s needs, and it allowed us to quit the gym, which is quite a distance from our home,” Susan says. “It made life so much easier.”

Behind the build: Indoor therapy pool

About 30 miles north of Baltimore, Parkton is a small city of about 6,000 people. This area of Maryland is no stranger to the seasons, and it gets about 29 inches of snow per year.

And while Susan’s swim spa is indoors, the snow was a factor in the installation.

“The room was built specifically for the swim spa and built around it,” Susan says.

The contractor thought of every detail, from what was below the ground to the ceiling materials.

The foundation for the swim spa was framed like a traditional deck, using pressure treated lumber. However, it was engineered to support the weight of the filled swim spa, which is nearly 11,000 pounds. The footers were sized properly, and the joists were doubled up. The support beams were also bigger to accommodate the spa.

After the Therapool was in place, the contractor installed water-resistant decking around the spa. The composite material is ideal for an indoor swim spa, while the color and design replicates the look of ipe. Ipe is an exotic hardwood that’s growing in popularity but can be expensive. The composite offers the same amber and brown tones — along with the tropical vibe.

The contractor also used the composite decking to build a custom platform and steps for easier access to the spa.

Ventilation and humidity control is often a consideration when installing a swim spa indoors. But Susan says humidity has not been an issue. The rolling swim spa cover keeps the moisture in the spa. When the spa is open, Susan will open one of the many windows if it gets too humid.

How long does it take to build an all-season room with an indoor swim spa? Susan says the project took about two months.

Other features of the installation include PVC and vinyl trim and heated mats on the walkway to the spa.

Master Spas recommends changing your swim spa water every six months. But how often you change the water can depend on the people using the spa and your maintenance routine.

And for Susan, her water care routine has helped her keep the same water clean and clear for over a year.

Her biggest secret? Following the Master Spas owner’s manual to a “t” during the initial fill.

When you first add water to a swim spa, there are a few things that can help you. A pre-filter, as well as a sequestering agent, can remove any heavy metals from your source water. Next, you balance alkalinity and pH. After the alkalinity and pH are in range, you should add chlorine slowly until it’s between 5 and 8 ppm.

Please note: Allow the chlorine to fall into the safe range, which is 2 to 5 ppm.

The H2X Therapool SE is an 11-foot swim spa, and it was designed for water exercise and hydrotherapy. It has 21 jets, including three flow stream jets, as well as contoured seating and the ability to adjust the water temperature up to 99 degrees.

When Susan was shopping for a swim spa, she wanted a model that was well insulated for the Maryland winters. The swim spa is indoors but the room is not temperature-controlled. Master Spas swim spas feature full-foam insulation, which keep the heat in and the elements out. The Therapool SE can be used year-round, whether it’s inside like Susan’s or installed outdoors.

Susan uses the swim spa for aquatic therapy but also enjoys the relaxation features. The Therapool SE has out-of-water neck and shoulder jets, as well as jets that target the legs and feet. The combination of warm water and jets help the muscles recover after a workout.

Another feature of the Therapool is a gradual step down to the swim area. These steps allow users to feel confident as they move around the spa. The non-slip flooring system is an added safety feature.

How to buy a swim spa

Are you ready to upgrade your backyard in 2022? A Master Spas swim spa can help you relax and unwind in the convenience of your backyard. You can click here to discover our secrets to creating a backyard oasis. Or, contact your local Master Spas retailer to learn more about swim spa ownership. Wondering how much a swim spa costs? You can request a quote here.