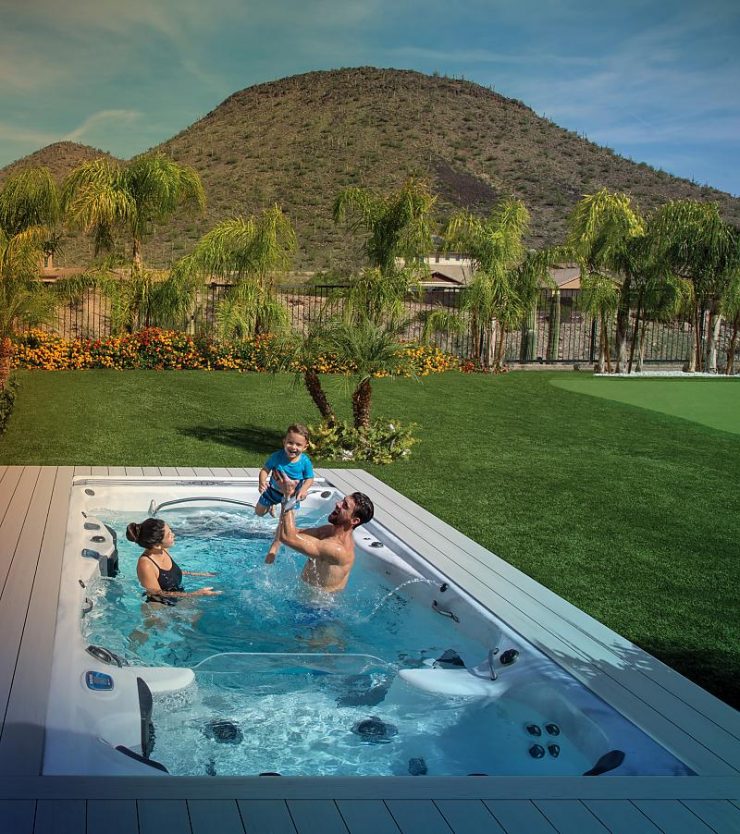 The world is used to seeing Michael Phelps as a competitive swimmer, with lots of medals hanging around his neck.

But a new video of Master Spas shows a more personal side of Phelps and how he enjoys spending time in the water these days.

Starring the World Champion swimmer and his family — wife Nicole and their oldest son, Boomer, the video features animation and live action. It captures the imagination and joy of a child, as well as the special bond between father and son. We get to see a happy Boomer Phelps playing with dad Michael in an MP Momentum Deep as mom Nicole looks on.

Showcasing the versatility of Michael Phelps Signature Swim Spas, the video also features Michael Phelps spending time with his family, as well as working out, swimming, and relaxing.

“I may not be training the way I used to but the water will always be a big part of who I am,” Phelps says. “I enjoy being in the water as much as ever, but now, as a parent of two boys, the water has taken on a new meaning for our family. It’s become our retreat, our family oasis.”

“What I love about the swim spa, which has an adjoining hot tub, is the chance to escape and unwind for the day. The warm water offers a place to take a deep breath and relax.”

Boomer and Beckett both love being in the water, and the Phelps family is expecting a new addition later this year.

Phelps is an advocate of water safety and promotes learn-to-swim and recreational aquatic activities through his non-profit, the Michael Phelps Foundation.

“The Michael Phelps Signature Swim Spa has an intimate setting where you can teach kids to swim,” Phelps says. “It’s not intimidating so kids can become comfortable and have fun during lessons.”

In the video, fans can see Michael and Boomer share special moments together in the swim spa, playing and laughing.

The partnership between Phelps and Master Spas began in 2010, with the launch of the industry-leading Michael Phelps Signature Swim Spas line. Master Spas has continued its reputation for leadership with the addition of innovative, industry-first features such as the Wave Propulsion System and Swim Number App (SNAPP). Today, Phelps’ relationship with Master Spas also includes the Michael Phelps Legend Series, an ultra-premium line of hot tubs.